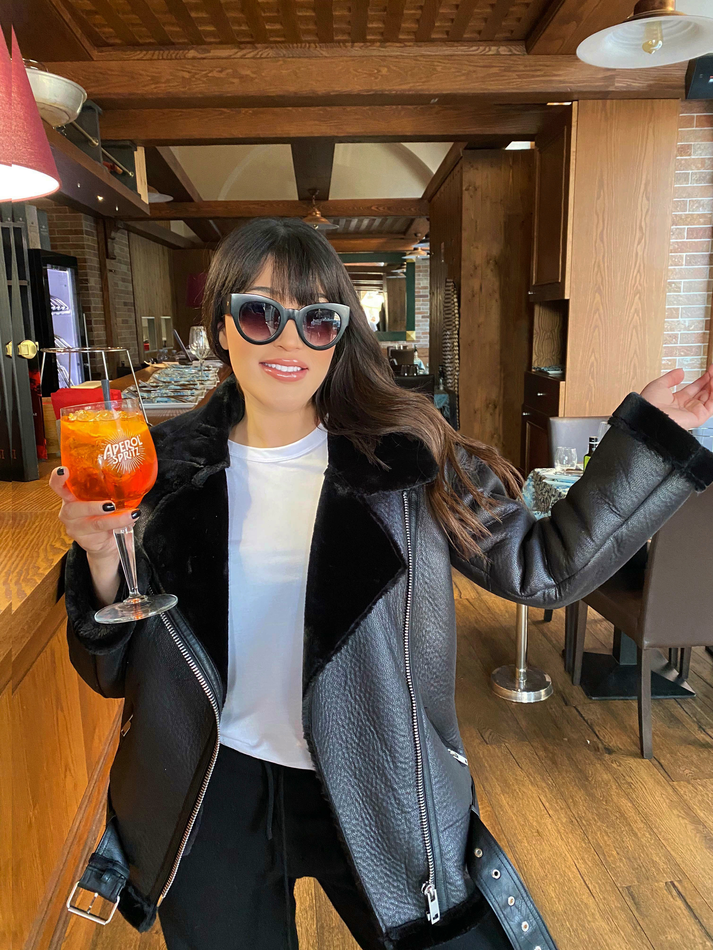 I knew exactly what I was going to wear. After all, it was my first MSGM fashion show. I wanted to go for Dolce & Gabbana meets Wednesday Adams. I had this whole Euro princess - Victoria Beckham attitude and look in my head. Little did I know this was a total American ideology, but I will get to that later. As I said, I had my whole OOTD entirely planned out. I even made a trip to Sephora to find the perfect Wednesday Adams Chanel lip color. If you Google ‘Dolce & Gabbana 2016’ you see the Marina Forsetti headbands with the shade of Chanel lipstick I purchased. I just added a cute white collar dress to marry the two and ta-da! I was ready to hit the runway.

I ordered an Uber. A black Mercedes van pulled up to the curb and a gorgeous handsome looking driver got down to get the doors for us. Mama mia! *was I in love. I expected nothing less at this point. *La Milanese way of life was completely my thing.

We are at the MSGM fashion show. Holy moly, was I underdressed! I thought I was looking a little extra and fly, but no. Was I wrong. I had forgotten we were in the fashion capital of the world where the futuristic trend was ‘in.’ I was not dressed up to par at all. There was nothing I could do at this point but own it. This was a once in a lifetime kind of thing and there was nothing I could do but live and enjoy the moment. We were standing outside the show and it was completely packed. Paparazzi all over the place. Fashion icons, bloggers, journalists, models, fashionistas, buyers, owners, and even famous Instagram dogs. All fashion people UNITE. Everyone was so extra. I love it. Neon, print on print, gender-neutral, everyone’s outfits were on point – Milan was the fashion world.

Marilyn started pressuring me to go inside and take our seats. We were registered buyers. Keyword: buyers. That means we had first priority. Wait, we are actually US buyers, that means even more VIP. Dang Marilyn. You go Glen Coco! I am not going to lie and act like I always have my act together or that I am as confident as I appear to be. The truth is that at the end of the day, I am human. I have the insecurities of a rookie even with 11 years of hard work and experience under my belt. . The room was dark and comfortably crowded with all sorts of media and journalists. Over 1000 chairs filled the pink carpet floor. We were immediately greeted with warmth and importance as they asked us who we were. I was living in the moment. I had been to tons and tons of fashion shows, as well as having hosted my own, but this was a whole different league. Nothing I had ever experienced before was anything like this. This was the real deal. We were seated in the front row among celebrities, famous bloggers, and influencers. It was awesome. However, I seem to know none of them. Oops! Thank God I have Marilyn for that. She is a genius, my right arm, and the brains of GAL. She whispers, “omg, the twins.” Of course, I am oblivious and have absolutely no freaking idea who they were. Apparently, they are the most famous fashion runway show attendees of our generation. You learn something new everyday.

All the chairs are full and the room is packed with beautiful people. All of a sudden we hear a loud ‘SHH!’ and the lights are off. BAM! The DJ hits off beats to the rhythm of flashing lights. Creepy music remixed with soft rock begins to play. Like everything, it was quite bizarre and futuristic but kind of cool. It’s unexplainable.

Less than 10 minutes later the lights were back on. People start clapping, the show was over. What, that was it? The runway show was less than 10 minutes long! It all happened way too fast. I didn’t even get to focus on the looks and the designs that much because it was like super-fast. There were 10 to 15 models tops wearing bright oversized clothes down the runway. Everything happened so fast. All of this hype and adrenaline for only 10 minutes? I don’t know what the point of a show is if it is going to be that fast, but OK. Again, this was a once in a lifetime kind of deal so I was determined to enjoy every single second of it.

The designer was super young. He was probably around his early 40’s. He walked around the room after the show wearing sneakers, a sweater, and jeans. He was super chill and ready for the press. I took a picture on the red carpet and we were on our way out. It was barely 12:30 PM and there was nothing else on the schedule for the rest of the day. I guess It was time for an Aperitivo.

We had a whole day ahead of ourselves and our trip was soon coming to an end. Thus, we decided to spend the rest of the day sightseeing and enjoying Milan. I wanted to see what this city was all about, other than the amazing fashion and its beautiful people. I wanted to visit Arco Della Pace, the city gate of Milan and a quite famous Instagram worthy location. To do so, I needed to change my outfit. We quickly headed to the apartment and slipped into a cocktail pale-pink glitter dress by RTA that I had purchased in NYC the week before Valentine’s Day. The dress was cute and a bit futuristic, as it seems to be the trend of this year. We headed to the arc and took some Instagram worthy photos. As we were strolling the streets of Milan, a waiter said, ‘Hey Bella, why don’t you come inside for an aperitivo’. Wait, what is he talking about and why is everyone around us having an orange drink? It was then that I came to discover the famous Aperol Spritz among the beautiful people of Milan. Whoah. Were my taste buds in for a refreshing ride! If you have never had one before, Aperol is an Italian liquor made out of rhubarb and oranges. When mixed with Italian Prosecco, soda and orange slices, you get the famous aperitivo Aperol Spritz.

If you have been following me or visited GAL after my trip, you know that the famous Aperol Spritz is what we serve at GAL Fashion. I have now hooked a lot of people on this cocktail. You are welcome.

After the most enjoyable evening and a couple of rounds of refreshing and delicious Aperol Spritz, we were ready for dinner. How does lobster sound? Yum! As we were walking down Via Gesu, I told Marilyn that I had been doing a little research of my own and saw that anything that is made in Italy is a lot cheaper than what you pay for in the US. This could only mean one thing: danger. 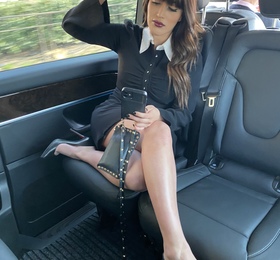 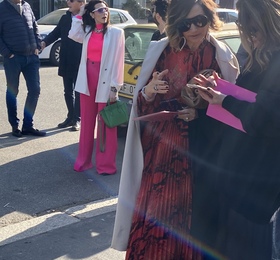 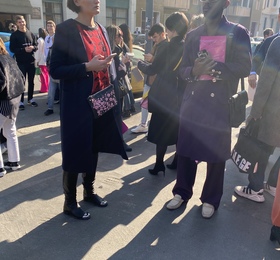 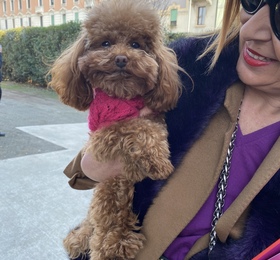 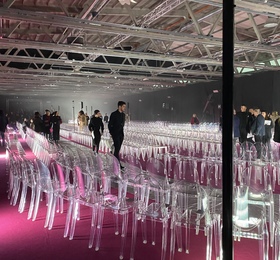 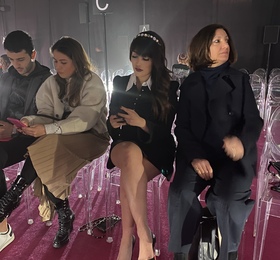 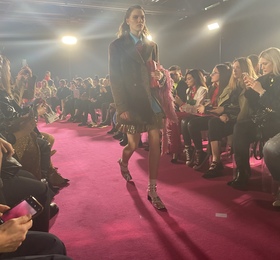 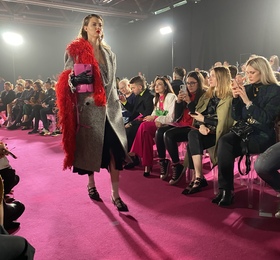 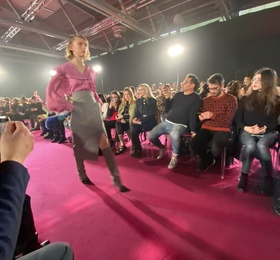 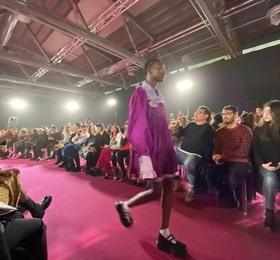 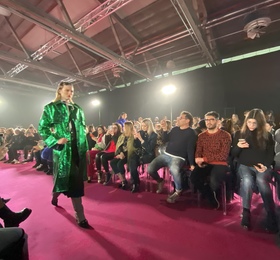 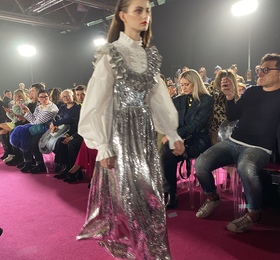 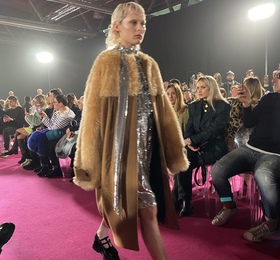 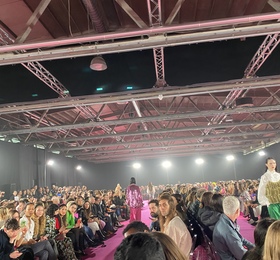 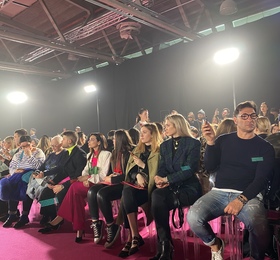 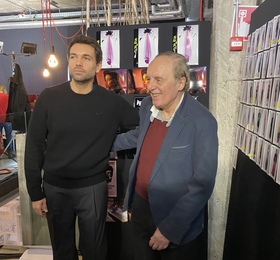 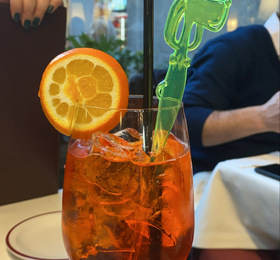